What is the “5 Technique” in Football? (Explained) 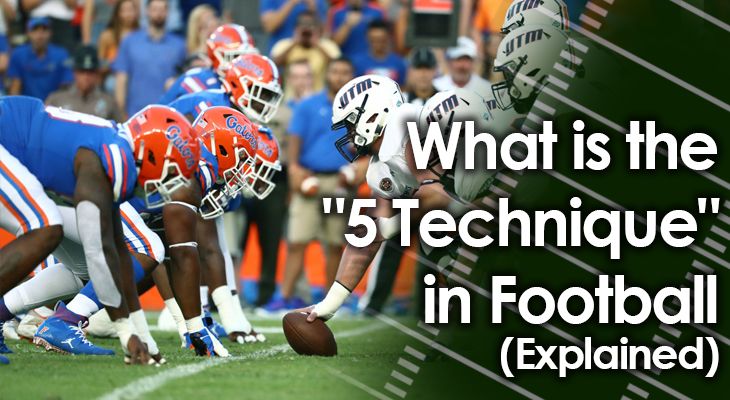 Football can be confusing at times.

With so many different schemes, plays, alignments, and calls... it's hard to keep up.

Football coaches know this, so they do whatever they can to simplify the game.

One example of this is the different defensive line techniques that were created to tell these players where align themselves on the field.

In this article, we'll discuss the "5 Technique."

In most cases, the player who fits this mold is a defensive end who will play on a team that uses a 3-4 defensive front. This means that there will be three down defensive linemen — one nose tackle and two ends — and four linebackers.

Let's take a closer look at what a 5 Technique in football is, as well as what the roles and responsibilities of this player would be.

To help simplify various alignments along the defensive line, coaches assign numbers to the most common places where defensive linemen will position themselves before the snap.

For example, the 0 Technique will line heads-up over the center.

The numbers progress up as you move to the center's right or left, with each subsequent number representing where the defensive lineman starts the play, and what type of player he is.

The 5 Technique lines up on the outside shoulder of the offensive tackle.

While the specific numbers for the techniques only technically refer to where the player lines up pre-snap, they also (by default) dictate the type of player that fits best to play that technique.

The 5 Technique has a few major responsibilities.

Through different moves once the ball is snapped, the 5 Technique could stay to the offensive tackle's outside shoulder to get into the backfield through the C Gap.

Or, he could curl and move toward the inside shoulder of the offensive tackle, breaking into the backfield through the B Gap.

This situation provides a lot of excellent opportunities for some stunts with either the defensive tackle or linebackers on the same side of the field.

On passing plays, the 5 Technique has one primary job — to rush the quarterback and cause disruption.

Defensive ends are often the leaders of a defense in terms of quarterback pressures and sacks. They love rushing the quarterback, and it's basically their only job on passing plays.

A 5 Technique has to still cause the same disruption by busting up the blocking assignments for the offense, but he can't just fly into the backfield.

He must keep his eyes peeled for where the running back is going, and he can't let any runner get outside of him. We call this keeping outside contain.

One of the primary responsibilities of this player on running plays is to force the ball carrier toward the middle of the field — if he can't make a tackle on his own.

That's because most defenders will be in the middle of the field, so they can help make the tackle.

What Makes a Good 5 Technique?

Not every player in this spot will be exactly the same.

While they'll all have similar body types and skillsets, there are some teams that have "specialists" for this position.

Much like there are some slight differences between outside linebackers (the Sam and Will), there are some teams who choose to employ their 5 Techniques in different ways.

When an offense uses one tight end on most plays, there will be an extra player along the line of scrimmage. Wherever the tight end is lined up is considered the "strong side" of the field.

On that strong side, they will be lined up on the outside shoulder of the offensive tackle, but will also have a tight end to deal with.

On the weak side in this scenario, they will have no one lined up outside the tackle, so he'll only have to deal with that player.

The strongside player will need to take on double-team blocks more often with the tight end and tackle, and will also be responsible for jamming the tight end on plays so that he can't release on a passing route with ease.

Not every team will designate a strongside and weakside 5 Technique.

Teams that do will have their specific players line up on the strong and weak sides of the field.

Teams that don't will just have each of these players line up on the same side of the field (either left or right) no matter what, and won't have them switch based on where the strong side is.

Either way, all of them will be strong, agile, fast, and quick players who love to run their high motors and cause disruption along the line of scrimmage and in the backfield.