What is a Pancake Block in Football? (Explained) 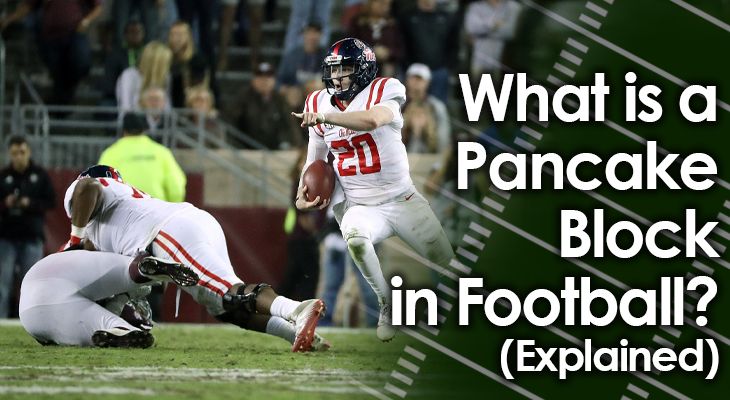 It's the outcome coaches hope for in every block by every offensive lineman on every running play.

While there is no official statistic for pancake blocks in football, it's one of the most celebrated plays by offensive line coaches and offensive line groups.

While a pancake block doesn't result in a score, it does often result in a big play for the offense since it completely takes a defender out of the play.

Let's take a closer look at what a pancake block is, where it came from and how to execute one.

What is a Pancake Block?

A pancake block isn't a specific play that called in a huddle.

Instead, it's a term that's used to describe the end result of a run block by an offensive lineman that sees the defensive player end up flat on his back.

When an offensive lineman is able to execute on his technique perfectly and completely overpower the person he's blocking, his power and momentum can cause the defensive player to topple over straight backward.

This is why it's called the pancake block... because in the end, the defensive player is lying on his back, flat as a pancake.

Executing a pancake block effectively opens up a huge hole along the line for a running back to go through.

A pancake block can only happen on running plays, as the offensive lineman will need to drive straight through the defender downfield -- as opposed to sitting back and protecting the QB like on a passing play.

Where the Term "Pancake Block" Came From

During the 1983 and 1984 collegiate season, University of Pittsburgh offensive tackle Bill Fralic reigned supreme on the field.

He was an All-American player and simply devastated defenders.

Fralic had a propensity to block opponents so well that he ended up knocking them down on their back.

He was so good at doing it that the coaches at Pitt began to count the number of times he was able to register this kind of block in a game.

The department of media relations at the university soon labeled Fralic's blocks as "pancakes," and eventually stuck as an unofficial term.

In the years that followed, other universities began to use the term. Nebraska, for instance, started using it when referring to their offensive line.

At Ohio State, all-world lineman (and future NFL Hall of Famer) Orlando Pace was so dominant that the department of media relations sent magnetic pancakes as a reminder to voters for collegiate awards to vote for Pace and his awesome talents.

Today, the term pancake block is widely used in all football, at all levels, to describe the block where defenders end up flat on their back.

How to Execute a Pancake Block

It's simple to teach the pancake block, but it is not easy to execute.

If you're an offensive lineman who wants to learn how to do pancake blocks, follow these steps.

Step #1: Hand on the Ground

First, when you're in your three-point stance for a running play, put a little more weight on the hand you put on the ground.

This will help to increase the forward momentum of your body.

Step #2: Explode at the Snap

At the snap of the ball, fire hard out of your stance, and immediately engage with the player you're assigned to block.

The key is to get your hands under the chest pads of your opponent right away which will give you the leverage needed to execute a pancake block.

In essence, you will be knocking them off balance by pushing them up off their feet and back at the same time.

Once you start to get them off balance, you need to drive them hard straight back downfield.

Keep your head up while you do this so the defender can't simply push down on the back of your helmet to knock you off balance.

Keep your feet moving as you're driving defenders back, and keep your hands strong and your arms tight.

At this point, they will basically be stumbling back on their feet.

This is when you want to roll your hips.

Ultimately, you'll end up putting defenders on their back with the power of your core and legs.

When you roll your hips in this way, you'll be thrusting the defender completely off the ground.

Explode through their body, and as they fall to the ground with their head up, you'll be driving them down with your head down.

You'll land directly on top of the defender when you execute a pancake block perfectly.

This will not only take your defender out of the play, but will also help your team gain yards on the run.

Executing a pancake block create a physical obstacle of your body and his standing in the way of other defenders and the running back on your team.

While there is no official statistic to track pancake blocks, you can bet that all offensive line coaches are paying attention to how many of these plays their linemen are able to execute.

The pancake block is a devastating block by an offensive lineman in which the defender he's blocking ends up flat on his back.

With some lessons and some practice, you can learn how to execute a pancake block and open up huge holes in the running game.