How to Hold a Football Correctly (When Running and Throwing) 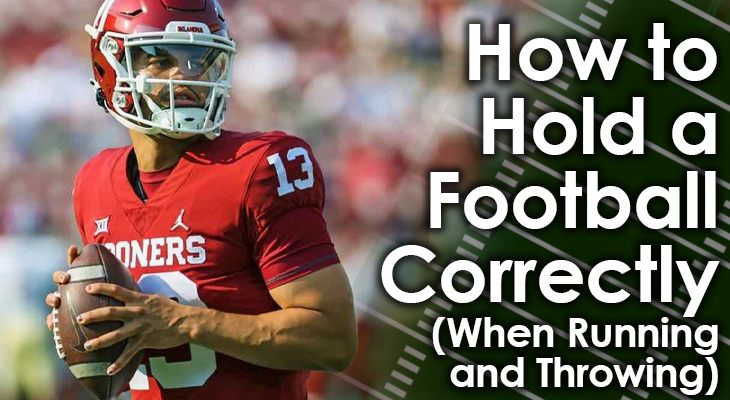 Learning how to hold a football correctly is critical for all players.

Whether you're running with a football or about to throw it, the proper grip may ultimately determine the outcome of the play.

If a RB doesn't hold the football properly while running, they're more susceptible to having the ball knocked out of their hands for a fumble.

Learning how to properly hold a football is a vital skill for all players who frequently touch the football, regardless of the position they play.

Let's take a closer look at the correct football grips.

How to Hold a Football While Running

How you hold a football when running is exactly the same for every position.

This goes for running backs, wide receivers, tight ends, and even quarterbacks who carry the football -- after direct handoffs, pitches, or completed passes.

Here's how to do it:

Step 1. Point in the Palm

The first thing is make sure the point of the football in the palm of your hand.

It doesn't matter which point of the football goes in the palm of your hand, as the ball is the same on each side.

It also doesn't matter how the laces are faced when you hold the football -- they can be either facing in toward your body or out away from it.

To start, try holding the point of the football in your dominant hand.

Step 2. Finger at the Point

Next, put the index finger on this hand at the top of the ball.

The ball should now rest on the inside of that forearm.

The downward curve of the ball from the tip should lay in the palm of your hand now, with your fingers being able to wrap around it.

Your wrist should be positioned at the middle of the bottom half of the ball now.

Some players prefer to have the point of the ball rest between two of their fingers.

This is OK as well — the goal here is to find a position that's comfortable for you. 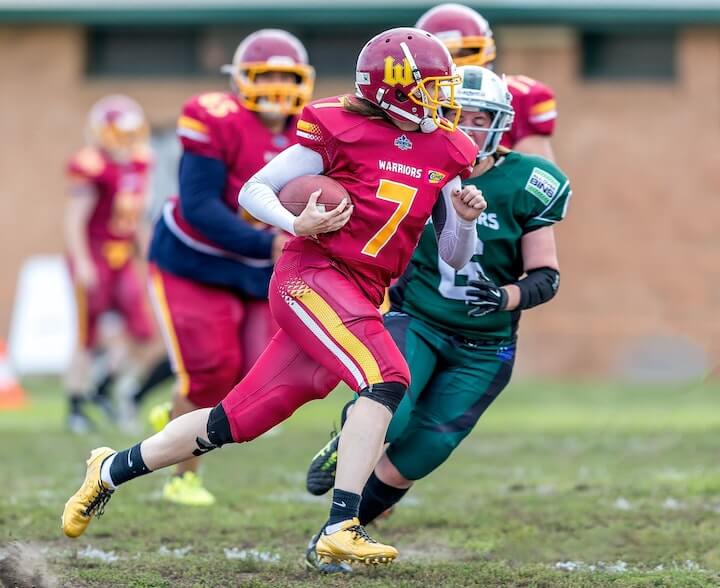 3. Curve the Wrist Up

Now that the ball is properly placed, curve the wrist up.

This will allow the ball to lay in your arm in a similar curve to the shape of the actual football.

You'll create this shape now by the positioning of your fingers, wrist, and forearm down to your elbow.

While you're doing this, grip the ball tight and press it against the arm.

Once the football is in your hand and arm properly, you want to provide stability while you run.

You do this by "tucking" the football.

This means holding the football against the chest on that side of your body.

Aim to have it pressed above where your abs are but below where your pecs are.

Your elbow should be positioned just to the side of the body.

When you're about to take on contact from a defender, you must provide extra protection to the football.

This is done by "wrapping" the football.

To do this, take your opposite hand and place it on top of the ball.

In this case, you'll move the ball closer to the front of your body, tucking it in near your stomach and ribs.

The hand holding the ball will be positioned on the bottom, and the other hand will cover the ball at the top.

This will provide extra protection when you're running in traffic and taking hits.

Tips for Running with the Football

When you're running with the football, you obviously want to keep the proper hold the entire time you do so.

That being said, you don't want to be too stiff, otherwise it'll affect your speed, agility, and ability to evade defenders.

While you run with the football, your arm that's holding the ball should move up and down just as you would when running without a ball.

When you do this, the key is to make sure that your elbow stays tucked into your body. It can be easy for ball carriers to let their elbows flail away from their body.

When this happens, it provides an extra angle that defenders can attack to try to knock the ball out of your hands and cause a fumble.

In fact, when defenders see that happening, they may forego trying to tackle you and instead just attempt to punch the ball out from underneath your exposed elbow.

2. Practice With Both Arms

It's very important that you practice holding the football with both arms, too.

Ultimately, the best options is to keep it in your outside arm.

For example, if you're running down the left sideline, the ball should be in your left arm -- which is away from where most defenders will be.

This will provide extra protection against potential fumbles.

This may mean that you're carrying the ball in your non-dominant hand, though.

So before you try doing that, make sure that you practice carrying the ball in that hand so you're comfortable with doing so. 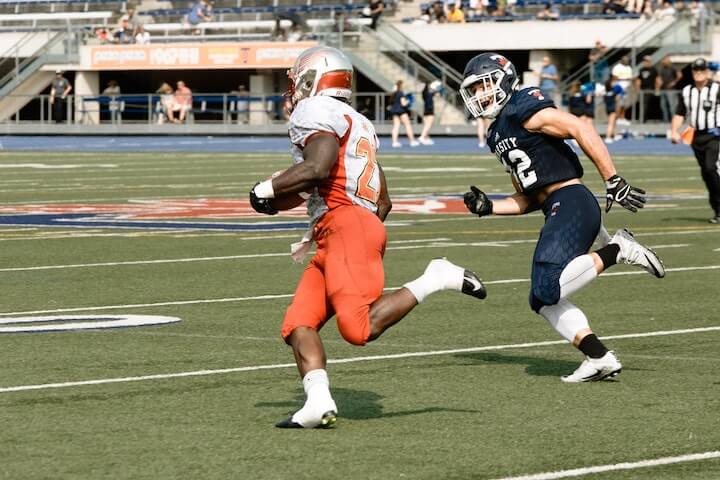 Hold a Football While Throwing

Mastering the correct way to hold a football is also essential if you want to throw a football properly.

The proper grip on a football will help you throw a football farther and with more speed and accuracy -- and more spirals, which is the ultimate goal.

Step 1. Position on the Laces

Positioning your fingers on the ball in relation to the laces will help you grip the ball properly.

Place your four fingers on top of the ball, on the side where the laces are, with your thumb on the other side of the ball.

Your hand will be positioned toward the top end of the ball, with at least your ring finger and pinkie between the laces.

You can also put your middle finger on the laces, or you can position it just above the top lace.

Place your index finger either close to the tip of the football or directly on it.

Your index also should cross the seam of the football that runs right down the middle of the ball through the laces.

By doing this, your index finger will be positioned in the same fashion over the seam as your other four fingers, and will form what looks like a right triangle with your thumb.

You'll need to spin the football in your hand if you want to throw accurate and powerful spirals.

To do this, grip the football with your fingertips.

It will be too difficult to spin the ball if you lay your fingers flat on the ball.

Arch your fingers so your knuckles raise off the ball a little bit.

When you release the football, push it straight ahead toward your target.

The spiral begins by spinning the football with your fingertips.

Again, if you're not gripping the ball with your fingertips, it'll be very difficult for you to do this.

When you release the football, your fingers should spin the ball, and the last finger that should be on the ball to give it the final push is your index finger.

The goal is to release the football from your hand when your arm motion is at the highest point.

This will ensure it travels the furthest it can with the most accuracy, rather than going to high or dropping down to the ground.

What a Secure Grip Does:

Having this secure grip will allow you to do a few things:

First, it will provide extra ball security should you take a blind-side hit from a defender -- much in the same way that it does for ball carriers when they're running with the ball.

If you see a defender coming in for a sack, having both hands on the ball will also make it easier to tuck the ball down into your body to absorb the hit and avoid fumbling.

Second, having the other hand on the ball will make it easier for you to tuck the ball and run, should you not find any open receivers -- or should you see a big opening for you to scramble.

Having both hands securing the football in this way will allow you to easily move the ball into either hand, depending on whether you're going to run to the right or to the left. 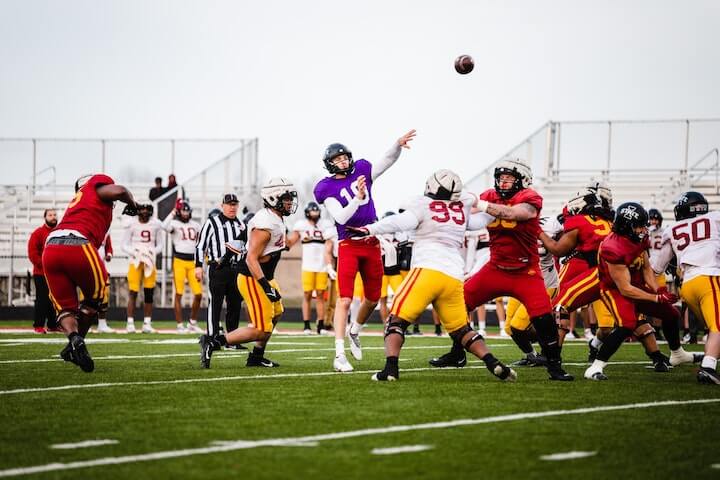 Knowing how to hold a football correctly is one of the most important aspects of not just gaining a lot of yards, but in protecting against a turnover.

Whether you're running with the football or throwing it, you need to master how to hold it properly.

Follow the steps and tips above to learn how you should hold a football correctly, and then practice it over and over again until you master it.