What is a Horse Collar Tackle in Football? (Explained) 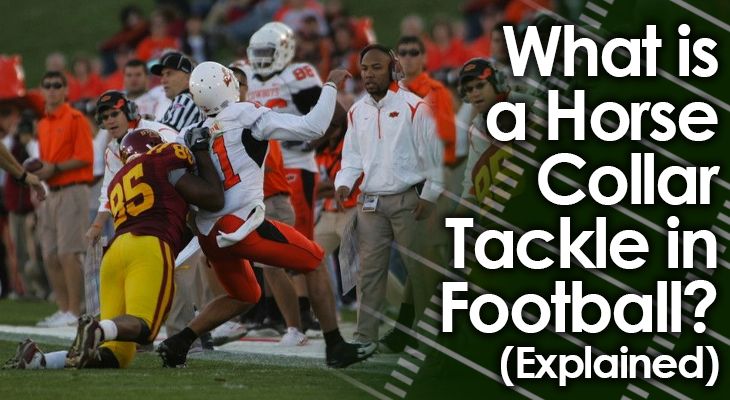 Over the last few years, many football leagues have been adding different rules to protect the health and well-being of players.

One of those rules is about the "horse collar tackle."

The horse collar tackle is one way defenders used to be able to take down ball carriers if they were unable to wrap them up as they are normally taught.

Here's what you need to know...

What is a Horse Collar Tackle?

A horse collar tackle is a maneuver that defenders use to use to tackle ball carriers.

This maneuver allows a defender to still make the tackle despite the ball carrier being out in front of them.

A horse collar tackle is when a defender pulls down a ball carrier by placing their hands inside the collar of their shoulder pads.

At the back of the shoulder pads near the base of the neck, the pads have a loop shape that looks like a horse collar.

That's where the maneuver gets its name.

This section of the shoulder pads sticks out a little from a player's body, which provides some room for a defender to stick his hands in there, grab it, and then drag the ball carrier down by pulling hard on the pads.

It's certainly an effective way of tackling a runner when they're on the outside of the field or running downfield, but it can be very dangerous.

The Problem With This Tackle

This maneuver has caused quite a few serious injuries. When the ball carrier is being dragged down like that, their bodies can bend in awkward ways.

Their legs often get tucked under them and bend backward in unnatural ways, causing serious injuries to their knees, legs, ankles and feet.

They can also suffer serious back injuries as a result of this play.

As a result, the NFL and a lot of football leagues in America banned the horse collar tackle, making it a major penalty.

The Penalty for a Horse Collar Tackle

Because of the high potential for major injuries, it's classified with the most major penalties in a football game.

In instances of horse collar tackles, the defense will receive a 15-yard penalty at the end of the play.

The referee adds these 15 yards onto wherever the tackle occurs.

If the runner gets tackled at their own 25-yard line, then, the next play will start at the offense's own 40-yard line.

In addition, a horse collar tackle will also result in an automatic first down for the offense, regardless of the down and distance after the tackle.

Even if the 15 yards forward wouldn't result in a first down for the offense, the team will still get an automatic first down as a result of the penalty.

The horse collar tackle used to be an effective way for defenders to tackle a runner when he was outside running away from a defender.

They would simply grab hold of the back of the runner's shoulder pads or jersey and drag him down to the ground.

However, due to the many major injuries it caused, football leagues banned the horse collar tackle and started instituting harsh penalties on the defense for doing it.

This is just another reason why youth football coaches need to teach and preach the fundamentals of tackling to all their players.

Not only will it help keep everyone on the field safe, it'll result in better, more efficient tackling for the defense -- without getting called for a penalty.