Football Training Equipment: 11 Items Every Coach Needs to Have

Being a football coach takes a lot of dedication, hard work, leadership, preparation, and a lot of other skills.

It takes smarts and intelligence to understand the game, both on offense and defense.

It takes the ability to adjust the gameplan on the fly as situations in the game are unfolding before their eyes.

Coaching football takes a lot of time and, as a result, a genuine love for the game and a desire to pass that love onto the next generation of players.

For coaches, practice makes perfect – just like with players.

The more coaches teach the skills and intricacies of the game, the better they’ll become at it.

People who are new to coaching football might not know where to begin.

They may understand the skills that are necessary to teach to their players, but they might not know how to do it.

For those people, this article will help you understand how best to teach your players how to play football.

And, most importantly, what football training equipment you’ll need to do it.

The following is a list of the necessary training equipment every football coach needs to have, broken down by category of what they’ll help with. 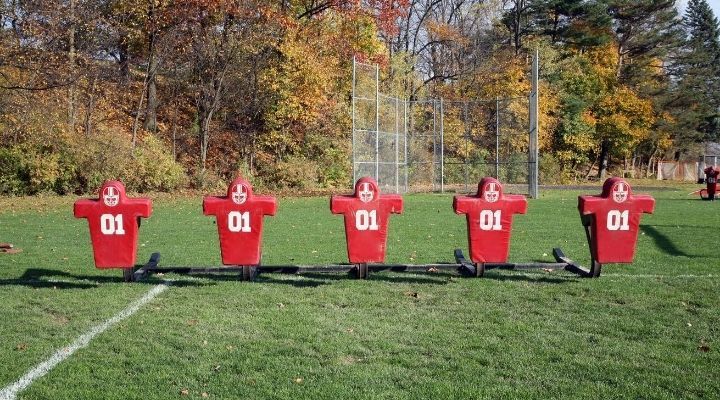 One of the most famous sayings about the game is that the success of a football team starts up front.

The offensive and defensive lines are the key to how well the other players on offense and defense can perform.

Offensive and defensive linemen will take on and initiate a lot of contact on every down of a game.

The idea for coaches, then, is to limit the amount of contact that these players have to endure in practice.

The way to do this is by having blocking and tackling dummies.

They’re soft pads that coaches can hold up against their chest for players to engage with.

They’re bigger pieces of equipment that have five blocking dummies attached to a metal contraption.

This allows linemen to practice blocking and driving opponents back with more force than they can on a dummy held by a coach.

This applies to multiple players – quarterbacks and all kickers.

For quarterbacks, you can set up practice nets at different distances and places on the field and have them work on throwing a football to land on those nets – or at least hit them.

For these drills, the coach can make the quarterback drop back, scan the field, and throw to the net that the coach will call out during the drop back.

This would help the quarterback work on his footwork and focus, while also improving his accuracy when moving.

You can also have all of your kickers use the nets to practice their accuracy.

For placekickers, you can have them try to kick the ball and land on the net.

Punters can work on accuracy in a very similar way.

You’d just need a bigger net than for quarterbacks.

One of the things you want to teach your receivers is that they should try to catch the ball with their fingertips.

You don’t want them to focus the catch in their palms, as it’s harder to corral hard-thrown passes that way.

The ball can easily bounce off the palm and go incomplete – or even become intercepted.

Receiver training aids are bands that a receiver will put over their hands.

Attached to these bands is a plastic ball that’ll sit on their palms.

This makes it nearly impossible to use their palms to try to catch the ball and forces them to focus on using their fingertips to make the catch. 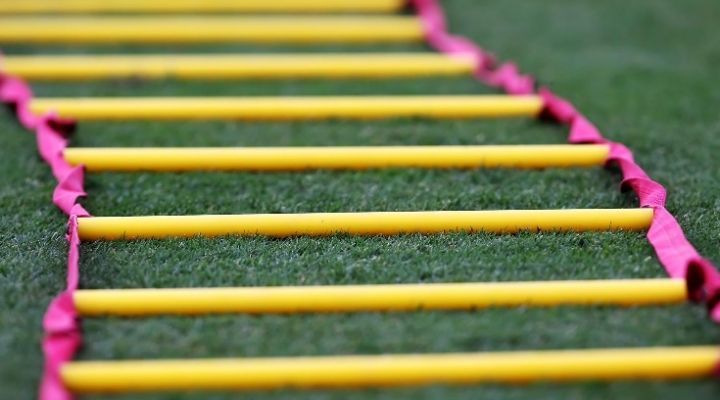 All football players need to work on their footwork. It’s an essential skill for all positions to learn.

Footwork can help linemen get in a better position and can also help your skilled position players get faster.

And two great pieces of football training equipment can help with these skills.

Cones are a straightforward tool that you can set up a few yards apart from each other.

Players will then be required to run in and out of these cones as they make their way from the starting point to the endpoint of the drill.

They’ll weave back and forth through the cones like skiers do on a slalom run.

One way to add to this drill is by having players run through the cones going forward, backward, and also shuffling side to side.

This will help players work on different agility skills that they’ll use in games.

Ladders are connected pieces of rope that form two columns of squares.

For drills, players are asked to move from start to finish by tapping their feet in each of the squares.

In this way, they’ll be working on shifting their body weight quickly as they move from side to side while also going forward as fast as possible.

No, you won’t be asking your players to go skydiving, hand-gliding, or anything else high-flying.

However, you’ll be using the power of wind resistance to help your players work on both their speed and their running power.

This piece of equipment is a parachute worn like a backpack.

There are straps that go over the player’s shoulder. The parachute is then connected to these straps.

When a player starts running fast, the parachute will pick up off the ground and get caught in the wind.

This will create significant resistance that the player will have to run against.

You can think of it as being similar to a batting weight in baseball.

When a player puts the weight on and swings the bat, it feels heavy.

When he takes the weight off to swing at the plate, the bat feels lighter and he can swing faster.

The parachute in football works the same way.

It’ll strengthen a player’s core and lower body and make him work hard to get where he’s going fast.

Then, in a real game situation (without the parachute on), he’ll be able to run faster. 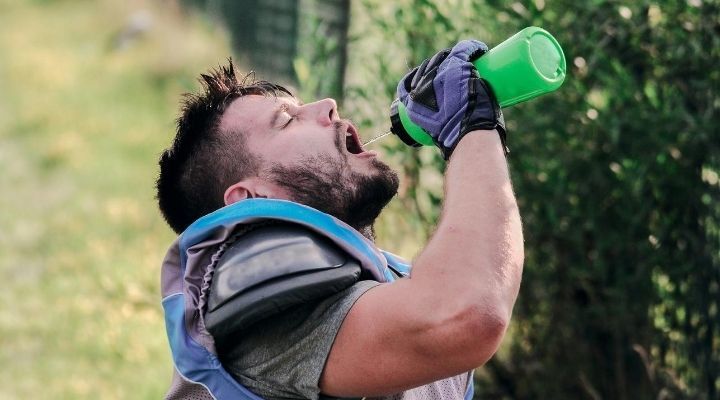 Football is a game that can be grueling on players’ bodies.

Here are some items:

Players can experience muscle aches and pain from inflammation, sprains, swelling, and strains.

One of the best ways to alleviate that pain is with compresses.

Some compresses are cold; these mainly help to reduce swelling and inflammation.

Other compresses are hot and can help with sore aches, such as a pulled back.

These compresses come in a lot of different forms, including gel packs that can be simply placed on a body part or even worn with the use of bands.

Football can drain a player’s body of essential salts and fluids.

Their body temperatures can also rise, especially if it’s very hot out.

All the equipment players wear – especially the enclosed helmets – cause this to happen.

So, coaches must help their players not only keep hydrated but keep as cool as possible during practices and games.

A great way to stay hydrated is by providing plenty of water and other sports recovery drinks – and giving players their necessary hydration breaks.

It’s also a good idea on those hot days to provide cooling tents that can provide an escape from the sun.

Under those tents, you can keep a cooler full of cooling towels that sit in ice water.

Players can then place those towels on their heads, foreheads, or necks to bring down their body temperature quickly.

Muscles and joints are very susceptible to injury in football.

These injuries can happen when a player tries to cut from one direction to another or when he uses his fingers to block or catch a pass.

A great way to provide extra support for these susceptible areas of the body is with athletic tape and wraps.

By wrapping ankles, wrists, and even fingers on these parts of the body, it can help players avoid injury – or re-injury if they’ve already suffered a sprained ankle, for example. 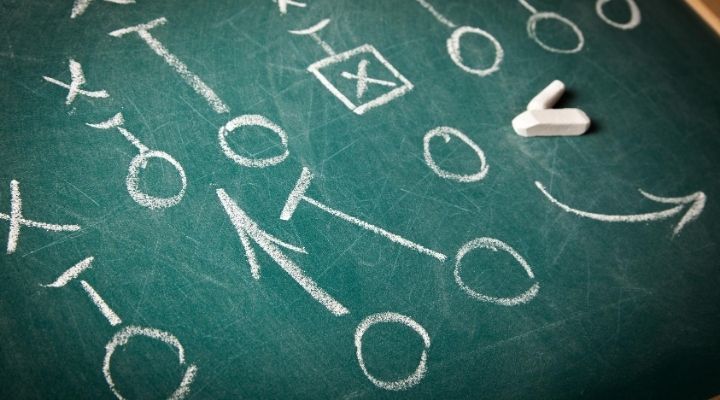 A football coach’s job is also to teach players about the X’s and O’s of the game, to call out plays quickly, and to motivate players consistently.

Here are some pieces of football training equipment that can help in those regards:

Quarterbacks and middle linebackers are the players on offense and defensive who are responsible for calling the play in the huddle.

But these players don’t get to choose which plays they want to run. Their coaches tell them the plays.

In the NFL, coaches can relay these calls to players directly through a headset that’s connected to a speaker in their helmets.

Coaches can also use intricate hand signals to call plays from the sideline.

Another option is to give quarterbacks and middle linebackers wristband playbooks to wear.

These small pieces of equipment are easy to wear. They have the names of plays listed that correspond to particular numbers.

Instead of the coach having to radio the play to these players or use complicated hand signals, he can instead call a play using numbers.

The quarterback or middle linebackers would then just need to look at the wristband playbook to know which play was being called.

Dry-erase boards are great for illustrating plays and schemes both before, during, and after games.

Larger dry-erase boards can be installed in the locker room so that coaches can draw out plays and show players their responsibilities either during practice, before games start, or even during halftime of a game.

Smaller dry-erase boards can be brought to the sidelines during games and practices.

Coaches can then quickly draw up plays that they want to run, or draw up examples of what just happened to help players understand.

Players are often publicly recognized for their accomplishments by their statistics – what they do on the field that translates into the stat book.

But there are plenty of other reasons why a coach would want to publicly recognize a player – such as when a player was unselfish, made an extra effort, etc.

An award board is a great way to do this.

You can set up different categories of awards that players can achieve in practice or games.

Then, as players achieve these awards, their names can be put on the board for the rest of the team to see.

Publicly congratulating players is a great way to keep them motivated to work hard.

This is especially true for linemen and other players who often don’t appear on a stat sheet because of their responsibilities.

A coach has many different responsibilities and many skills that they must teach their players.

This isn’t an easy job to do, but it’s one that’s made a lot easier with the help of football training equipment.

Football coaches should start with the training equipment listed above and then see what else they might need to accomplish their training goals.