What is a Stunt in Football (Full Explanation and Examples) 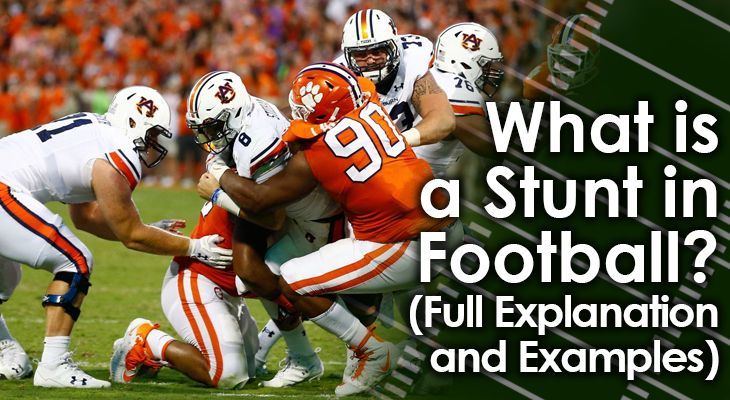 They can't just have every defender cover the player they line up opposite of on every play. If they did, it would be easy for the offense to design plays to take advantage of this.

Similarly, it's not a good idea to have all the defensive linemen and linebackers charge straight ahead on every play either, as it would be easy for offensive coaches to design blocking schemes to counter this.

So, defensive coaches need to come up with different maneuvers to keep the offense guessing.

One of the maneuvers they use are football stunts.

There are a number of different types of these.

Though different in execution, all football stunts have one simple goal in mind:

To confuse the offense.

This is done by changing the path of at least two defenders en route to the offense's backfield.

We now know what football stunts are, but how do you run them and when are they best employed?

The first main point is that stunts work best when used for two players who line up close to each other before the snap of the ball.

Some of the most common football stunts will include:

It would be next to impossible to accomplish a stunt with two players lining up far away from each other.

For example, you wouldn't be able to run a successful stunt with both defensive ends as they're lined up on opposite sides of the field.

The second point is that stunts work best on passing plays. That's because a section of the field will be temporarily unoccupied as the stunt develops.

Unless executed very quickly, they can actually create openings for running backs -- especially if the stunt happens in the middle of the line.

This is why football stunts are run more often in obvious passing situations.

More advanced teams can run stunts more frequently, but youth teams should start by trying to it on passing downs.

In this stunt, two defenders will cross each other's typical path to the quarterback, instead of rushing straight forward.

The cross rush often involves a loop wherein one defender "loops" around the back of another.

For this example, we'll discuss a cross-rush stunt involving the two defensive tackles.

The cross-rush stunt can also be done between a defensive tackle and defensive end, or any one defensive lineman and a linebacker.

If it involves a linebacker, though, the coach will want to have the linebacker align himself closer to the line of scrimmage before the snap of the ball.

The second most common football stunt involves pass coverage and pass rush. In this stunt, a defensive lineman will drop back into pass coverage instead of rushing forward.

He will take the place of one of the linebacker's typical pass coverage area. That linebacker will then rush forward in place of the defensive lineman.

This type of stunt is a little more advanced as it requires the defensive lineman to be extremely quick.

The lineman will also need to have more advanced knowledge of the game, as he'll have to drop back into pass coverage.

This isn't a skill that many youth football players will have just yet.

Almost all cases of this type of stunt will involve a defensive end and an outside linebacker.

This is because defensive ends have more speed than defensive tackles, which make them more adept at dropping into pass coverage.

One is the fact that against the run, they can actually open up running holes.

This is a big problem for youth football teams especially, since offenses run the ball a lot more than they pass it.

A stunt gone wrong on a running play can result in a huge gain for the offense.

Another potential downside is that there are only so many different stunts that can be run effectively.

Because of this, football stunts can become predictable to offensive linemen if they are run too often.

Balance is key when calling stunts, as they are ultimately meant to cause confusion, not be predictable.

At its core, football stunts are very simple maneuvers that can be taught to even youth football players.

A stunt in football is a great way to confuse the offense and keep them off balance as they try to gain yards.

When run properly, a stunt results in defenders getting into the backfield freely and cause major disruption.

There are some possible downsides to football stunts, though, so defensive coaches need to be mindful about when they use them.

Defensive coaches should make sure they aren't becoming too predictable with a move that's meant to be unpredictable.