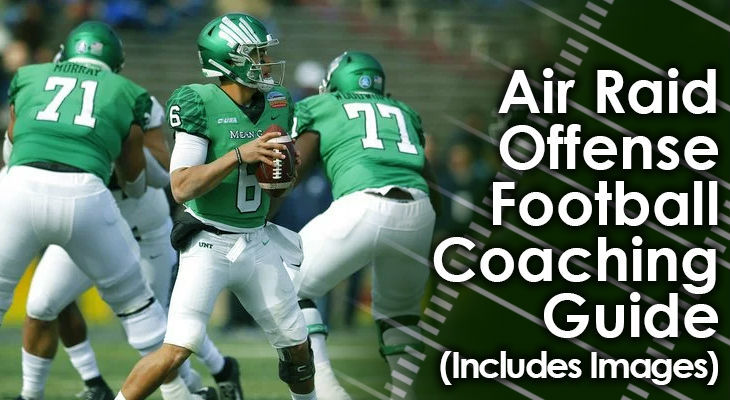 In the mid-1980s, the college football offensive landscape was built around running the football.

Sure, some teams with strong-armed quarterbacks would run some type of Pro Style offense, with their passer standing tall in the pocket…

But the majority of plays were still in the running game.

In fact, there were still plenty of college teams at this time who only ran the ball in offenses such as the Triple Option offense.

In response, some college coaches began trying to go the complete opposite route.

They created a pass-first attack that featured multiple wide receivers and the tendency to throw the ball all over the field to completely confuse the defense.

Instead of keeping the ball on the ground, these offenses were throwing it almost three times as often as they were running.

The offenses proved to be very successful, but they were thought to be gimmick-type offenses that could only survive at the college level.

But now some NFL teams are picking up on some of the fundamentals of the Air Raid Offense, and even lower-level football teams are running it, too.

The Air Raid offense creates mismatches by going with a smaller lineup of multiple wide receivers.

But despite its name, the offense isn’t all about throwing the ball deep down field every play.

The Air Raid offense uses short passes and quick reads as almost an extension of the running game.

And when these offenses do run the ball, they utilize a lot of misdirection plays to keep defenses guessing even more.

Who Should Use the Air Raid Offense?

​Teams With a Lot of Wide Receivers - The Air Raid offense will typically have four wide receivers on the field at the same time on every play. So a team that wants to run this offense should have a bunch of skilled players at this position.

Teams with Accurate Quarterbacks - The quarterback in an Air Raid offense doesn’t need to be able to throw the ball downfield all the time, but he does need to have a strong, accurate arm with some zip on it.

Teams with Shifty Running Backs - When the Air Raid does run the football, it does so with misdirection plays such as counters. Because there are only five offensive linemen on the field, it’s also important the running back in this system can make players miss in the open field.

Who Should Not Use the Air Raid Offense?

​Teams That Are Bigger - Teams with big offensive linemen who don’t move well, or with multiple tight ends and a fullback, won’t be the best fit for the Air Raid offense. This type of personnel would be a much better fit for a Pro Style offense.

Teams Who Lack Skilled Wide Receivers - To the same point, teams without a stable of wide receivers they can rotate in and out wouldn’t be a good fit for the Air Raid. In addition to the four wide receivers on the field every play, it’s good to have some extras at the position to substitute in to keep everybody fresh.

Teams That Are Slower - Similarly, teams with either slower offensive linemen or even bigger, slower wide receivers probably won’t do well in an Air Raid. It’s great to have one possession wide receiver who is bigger, but if all the team’s wide receivers are this body type, they may not run the offense to its peak performance.

​The Air Raid Offense will spread the field on every play, with multiple skill position players on the field instead of a bigger group of players.

This will force the defense to counter with either more defensive backs.

Otherwise, they’ll be asking slower linebackers to cover these receivers.

Here is the more traditional personnel in a Air Raid offense:

​The Air Raid offense is in a way a type of the Spread Offense.

The formation here will look a lot similar to some other Spread formations.

In addition to the four wide receivers on the field, the quarterback will line up in the shotgun instead of under center.

The offensive linemen will also take wider splits between each other than they would in other more traditional offenses.

The standard formation for all Air Raid plays are:

Center - Will line up in his normal position in the middle of the field.

Guards - Will line up in their normal positions, on either side of the center.

Offensive Tackles - Will line up in their normal positions, on either side of the guards.

X Wide Receiver - Will line up split out wide near the sideline, on the line of scrimmage.

Flanker - Will line up halfway in between the tackle and the X wide receiver, a yard or two off the line of scrimmage.

Z Wide Receiver - Will line up out wide near the opposite sideline of the X wide receiver, a yard or two off the line of scrimmage.

Y Wide Receiver - Will line up halfway in between the tackle and the Z wide receiver, on the line of scrimmage.

Quarterback - Will line up in shotgun, about five yards directly behind the center.

H-Back - Will line up in the backfield about two yards to either the quarterback’s left or right.

​The Air Raid offense will almost always have five players run a passing route on every play, with different players attacking different depths of the defense.

This will force the defense to cover the entire field, and also give the quarterback the option of throwing deep, over the middle or dumping it off for the shorter routes.

To understand how the Air Raid offense will use a combination of routes to confuse the defense, we’ll take a look at two different passing plays that can be run out of this offense. The idea of this pass play is to clear out the outside cornerbacks and attract the attention of the safeties by running deep routes on the outside.

This will then hopefully open up space over the middle of the field for two of the receivers who should only be facing single coverage.

The offensive line will take their normal positions on the field, with extra wide splits between them to spread out the defensive linemen.

At the snap, they will snap up and pass block.

Because of the five players running passing routes, the five offensive linemen should only have to block four defensive linemen and no one else, as it’s hard to blitz against the Air Raid.

The X will line up split out wide to the left at the line of scrimmage.

At the snap, he will run a fly route down the left sideline, ideally taking the cornerback with him and also attracting attention from the free safety.

If the cornerback doesn’t follow the X, then the quarterback will know that the defense is in a zone coverage.

The Z on the opposite side of the field will line up wide a yard or two off the line of scrimmage.

Like the X, he will run a fly route down the right sideline, ideally taking the cornerback with him and attracting attention from the strong safety.

The flanker will line up in the slot to the left, a yard or two off the line of scrimmage.

At the snap, he will run an In route about 11 yards down the field.

This play is designed to draw the two safeties deep with the outside receivers, opening up space in the deep middle for the flanker.

The Y will line up in the slot to the right, at the line of scrimmage.

At the snap, he will run a shallow drag route about three yards deep toward the left sideline.

He will hopefully be facing only single coverage from a nickelback.

He will line up about two yards to the quarterback’s right.

At the snap, he will run a flat route to the right, staying close to the line of scrimmage.

The H will be serving as the quarterback’s safety valve in case the other four receivers aren’t open.

He will line up in shotgun, about five yards directly behind the center.

At the snap, the quarterback will go through his passing progressions, starting deep with the two outside receivers, then turning toward the F, the Y and finally the H if everyone else is covered.

The quarterback should be able to identify if the defense is running zone or man-to-man coverage based off whether the cornerbacks follow the outside receivers downfield. This Air Raid play will be a little different, in that all four wide receivers will be running the same basic route – the slant.

The idea here is to provide the quarterback with quick passing routes so that he can make a quick decision and get the ball out of his hand fast, allowing the receiver who catches the ball to make a move in the open field to gain extra yardage after the catch.

Like the play above, the offensive line will line up with extra wide splits to spread out the defensive line.

At the snap of the ball, they will once again pass block, having to block most likely only the four defensive linemen.

The X will line up split out wide left again, at the line of scrimmage near the sideline.

At the snap, the X will run a quick slant toward the middle of the field.

He will run the slant about four yards in depth.

The Z will line up split out wide right again, a yard or two off the line of scrimmage.

At the snap, he will also run a quick slant toward the middle of the field, about four yards deep.

His route will mirror that of the X.

The Flanker will line up in between the offensive tackle on the left side and the X, about two yards off the line of scrimmage.

At the snap, he will run an inside slant, but he will take a slightly different depth on his slant.

He will begin his slant at around four yards but will take a less sharp angle to the middle of the field.

The Y will line up in between the offensive tackle on the right side of the field and the Z, at the line of scrimmage.

Like the Flanker, he will run a parallel slant route that will start at around four yards and then take a deeper slant toward the middle of the field.

The H will line up about two yards to the right of the quarterback on this play.

At the snap, he will run the same flat route to the right as he did on the Shallow Cross play.

The H will again serve as the quarterback’s safety valve.

He will line up in shotgun, about five yards directly behind the center.

At the snap, the quarterback will go through his route progressions, checking for how the defenders are following (or not following) the receivers to determine if the defense is playing man-to-man or zone coverage.

​The Air Raid offense is a great way to move the ball downfield quickly and efficiently through the use of the quick passing game.

When the offense wants to run the ball, too, it can do so effectively, catching defenses off guard with misdirection plays such as the counter run.

Still, the Air Raid offense is not for every team…

It’s especially not good for more advanced teams that are either built to run the football more or pass the football, but on deeper plays.

Also, the Air Raid isn’t the greatest option for much younger football teams that probably don’t have a quarterback with a strong enough arm to throw the ball all over the field just yet.